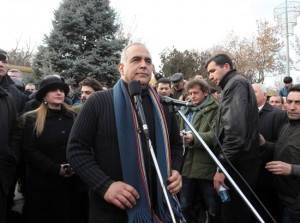 I recognize one flag, one state and there is one nation so I claim world leaders do not play geopolitical games with Armenian nation. We will not give up. May be a week or a month is needed by I will never give up”, he said and underlined that Armenian nation has won.

Concluding his speech Raffi Hovhannisyan asked the citizens not to call “the king” anyone.