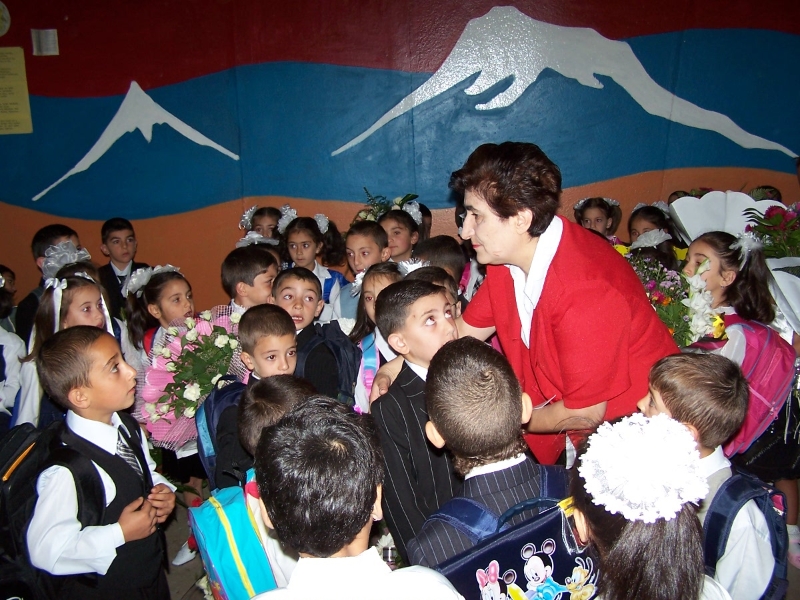 Armenian version is here
An Interview with Ms. Greta Kroyan, headmaster of the school # 6, Abovyan, deserved specialist of Armenian language and literature.

{mosimage}In your opinion which is the difference between the Soviet period’s and today’s school? Generally, how is the pupil’s treatment toward the school and studies???

One of the typical traits of our nation is the worshiping to knowledge and education. Every time the school creates, like darkness hanging in reality it tries to turn into a light. It has been devoted to itself both in Pre-Soviet and Soviet years so does now.

During the Soviet years, the school took into its shoulders senseless and uncountable instructions, sometime breaking projects and studding-plans in order to be heard national truths by the mouths of their teachers.

The knowledge’s sprout was deep enough, the informational borders – wide. There had been a solid institution, firm school, serious and relevant method for substantial knowledge, moreover stout and purposeful aspiration.

How is the professional level of nowadays staff? If you don’t mind, please remember and mention respectful memory teachers who left the school since 1972.

No, I can’t definitely say that the school has weakened and the new-comers don’t have the formers’ power. I think the concept of teacher identifies with self-devotion and immolation, and thanks to God in every period exist immolates. But I remember V. Aghajanyan, L. Manukyan, P. Hovhanissyan, R. Zaqaryan, S. Harutunyan, S. Sahakyan, J. Margaryan… with bending and pride. Now they spread lightness and thanks to their names and to their memory are incensed all period’s pupils.

{mosimage}How were the indices in last three years? What kind of achievements has got a school in Armenian or maybe in international Olympiads?

The school has diminished by pupil’s number like 530…But it never impedes that the school gains its unique signature in regional educational institutions. Our school is not some kind of stone and sand, but it’s a soul spiritualized by our elder’s blessings. The annual 7 traditional days, striking meeting surprises charge the building’s concrete. Beside this, last year in the object Olympiad realized within the Armenia, our school took the 11 place conceding the professional collage. This year, our school is the only one in the region which got the first place. It has success also in the subjects like the Armenian language and literature, geography and history. In the sphere of sport, the school is also devoted to its traditions. In the last three years we have come up the winner’s pedestal. Our team has got the first place in the pre-military and military aged teenagers within the Armenia. So, this year we won, and our teacher Artashes Hayrapetyan became a champion in Sambo championship.

How would you like to see the future school-leavers? Which are outlined good or bad phenomena in nowadays life?

Nowadays generation is both bright and purposeful. I appreciate the teenager’s aspiration of going deeper and deeper, the inclination of rummaging in the life’s ocean. Their light is inner and it comes out subsequently. The searching of colorful fairy-tale is typical to the new-comers also, which means that the appearing of the technology hasn’t prevented their pure dreams. I can see even unnoticeable things. Did I praise much? But surely this is the reality, my blissful today. And in order tomorrow not be just worse they should read, they should come up from the computer to book – the closest friend. Today we are luck of one national merit i.e. the returning of kindness. Unfortunately the kindness became lighter and lighter step by step.

Let them live right and always bring honor to their school. I consider my pupils to my scientific thesis, which are already asserted and have gained the best human quality for using in life…

How is the school’s technical condition? Is there internet? I think your former pupils who are now in abroad would like to make contact with their native school.

The school has 4 computers. Surely the school’s technology is the shape of property, but we are satisfied of what we have but of course we intend to make it more and more.

If it’s possible, please tell about yourself i.e. describe your day, meetings, worrying…

My dear, I don’t even have time to stop and think about my unfixed day. Time flies and very often I just sunk in the stream of self-refusal. So, would you like to make my time budge of rank? Every night I just die in order to catch my elders and to be with them, to make methods with teachers…and realize the educational policy which is near to my heart.

And among these sometime I became crazy, which time turns into trembling poems…

Abovyan is the city of people gathering from different regions of Armenia. So in your opinion, our city has confirmed or not? What kind of affairs you have, to which you would like to concentrate the authority’s attention?

Every day jangles our city’s song. City which is too young thought for some people it’s the native, for the others just childhood’s and teenager’s cradle, for the third – just dreamy refuge, for the ones who are far away – a beach of miss…

It would be better if the streets’ name don’t comprise the names of the places of the Armenia.

The city is young and even one generation hasn’t managed to get older here.

And at the end, wouldn’t you like to stress your precept to your former school-leavers, taking into consideration the fact, that www.abovyan.com is competent for your pupils who are abroad, which occurs eternal miss toward their school and stuff; so it comes to proof the letters directed to us.

Express whishes? Come home if it’s possible. But wherever you are, just stay a real Armenian. And love your school as the nation begins from here…